Add a Logo or Graphic to a Broadcast

BoxCast's Graphic Overlays allow you to add PNG images to your broadcast without any extra equipment.

With the BoxCast's Graphic Overlays feature, you can add PNG images to your broadcast without any extra hardware or software mixer/switcher equipment. It's as simple as dragging and dropping your graphics onto a canvas on the Dashboard and clicking Apply!

At any point after scheduling, you can upload PNG images and place them on a transparent grid to be overlaid on the video during the broadcast. The simple drag-and-drop canvas can be changed live during the broadcast. You can use this for lower thirds, full slates, watermarks — or any combination of these. You can even use this in conjunction with BoxCast Scoreboard Overlays. 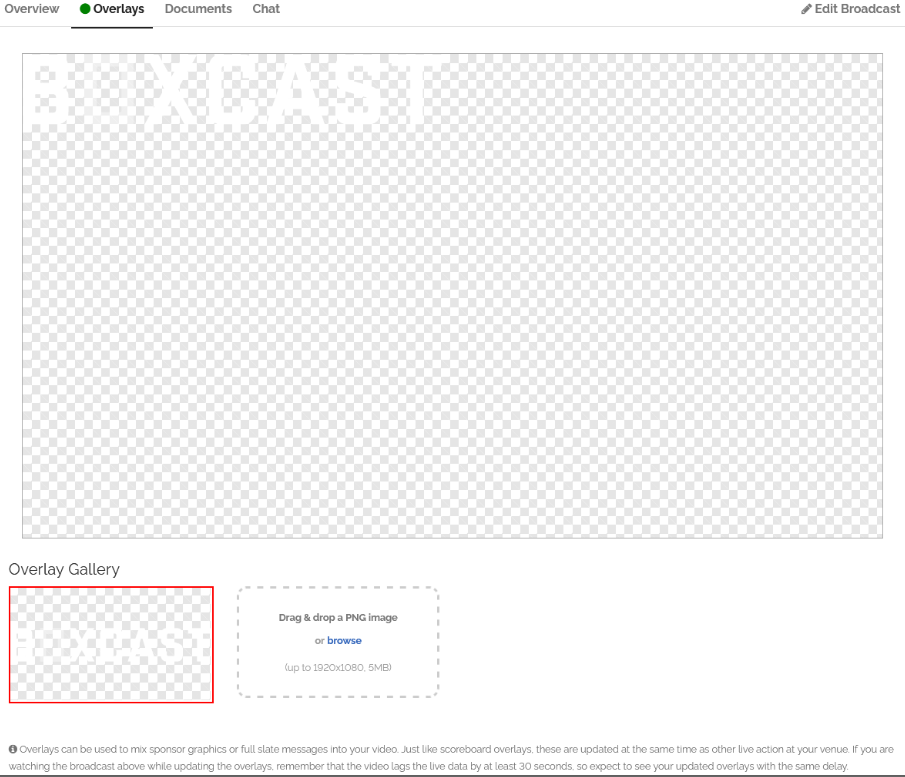 Note: The overlay is applied against real time, so it takes approximately 30–60 seconds for changes to appear to viewers in the video player.

Do I need this feature if I already have a video mixer?

No. If you already have video mixing capabilities, you can send that produced signal to BoxCast without having this feature.

Can I insert video overlays with this feature?

No. The Graphic Overlays feature only supports .png files.

Do the overlays appear immediately in the video?

Can I use overlays in conjunction with scoreboard overlays?

Yes. The graphic overlays will appear on top of the scoreboard graphic. If you want a full-page slate with the scoreboard showing through, you can add transparency in the area where the scoreboard would appear to allow it to show through the slate.

How many overlay graphics can I use at the same time?

We recommend no more than five simultaneous overlay graphics. If you think you need more, consider making a 1920x1080 graphic with all your images composed together.

Will the overlay appear if I have no other video signal or on audio-only broadcasts?

Can I set an overlay as a default for every broadcast?

You can set a default overlay when scheduling a broadcast. If you schedule a recurring broadcast, such as a Sunday service, this overlay will appear on every broadcast. 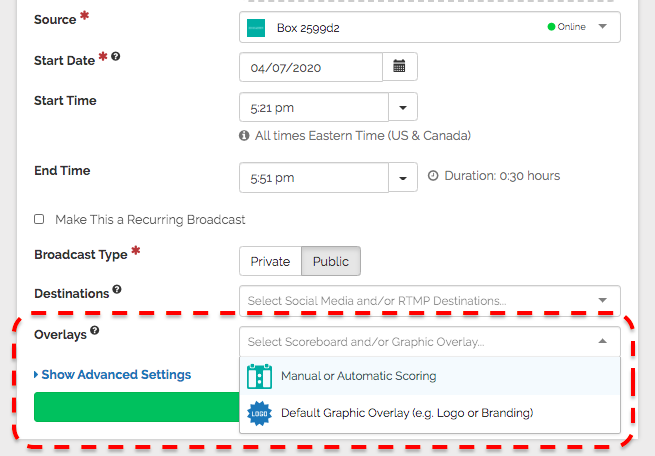 Can I use overlays for advertising or sponsors?

You may use overlays for advertising purposes, but the advertisements can't be interacted with and the metrics aren't tracked. Streams with advertisements or sponsorships can't be pushed to social media sites like YouTube or Facebook Live.

Can I set the overlay to automatically change in the middle of the live event?

No. At this time you must manually add and remove each overlay.

Why does an image appear to be large or need to be repositioned every time?

No scaling is performed on images. We'll present an image in its original size on a default portion of the screen. If you'd like an image to always appear in the same spot, consider creating a fully transparent 1920x1080 image with your graphic placed in the specific spot within the image. When this graphic is used, it'll be the exact size of the video player itself and the overlaid image will appear in the same place on the video player as it does on the transparent background.

Can I edit overlays on archived videos?

No. Overlays are injected into the actual video data itself.